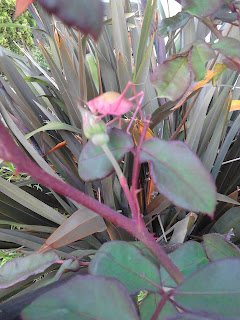 Some gardeners would grumble at the sight of a bug eating a rose, but not I. Feast on as many rosebuds as you desire, exquisite creature! Consider the garden your own personal buffet!

And while a picture may be worth a thousand words, there are  moving pictures of this katydid to go with!

Watching this clip almost inspires me to write a poem... stay tuned for an updated version accompanied by a poetry recital soundtrack...

(It's a pink rose this pink fellow is feasting on, btw, or at least, it would've been.)

Romance abounds in every garden, if you know where to look... and how to look past... 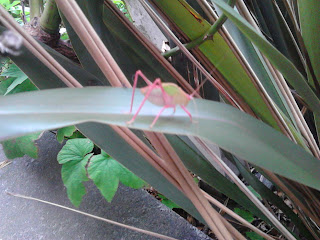 After numerous observations, I have arrived at the inevitable conclusion that ants are mischief makers. I don't mean in terms of raiding your jam jar or sugar stash, I'm talking about their antics in the insect world. Not only do they farm other bugs, they tease them as well. 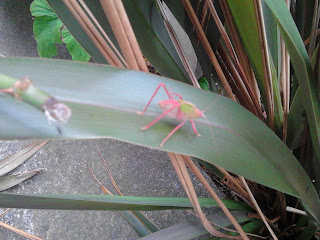 I was admiring a young stick insect resting on a leaf one day when sticky's quiet time was interrupted by three ants who took turns at speeding towards his feet. Amusing to me, and to the ants too, I suspect, but not to sticky. He did not like his feet being tampered with. He would lift up his back foot in protest... then his front foot... then his other back foot... The ants just wouldn't leave the poor fellow alone. 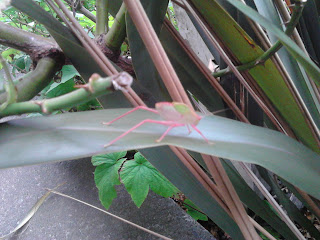 Maybe sticky had just stood in something sticky, which attracted the ants, but I doubt it. I think they were just trying to mess with his head. Or trying to get him to play tag... can't rule out that possibility, can we...

I saw some ants doing the same thing to a katydid, and managed to capture a bit of their mischief on film;

Bug vs Wind: A Stick Insect with Stickability. 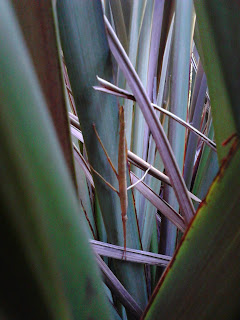 As aforementioned, I had to leave Stick Insect Metropolis behind, :( , and while I haven't found such a densely populated sticky community since, I have met a few on my travels. Yay.

I've also discovered that my phone can record bugs in motion. Yay some more.

Speaking of motion, and movement, and trying not to move in a counter productive way, I'm not really built for battling against the wind. I'm just too slight... When the weather is wild, I have entertained many occupants of cars that whizz past me as I try desperately not to become airborne on route to the supermarket. Lucky them. Sheltered from the gusts by their metal bits, while I try not to do a Mary Poppins. Grumble grumble. My spindly little frame isn't cut out...or perhaps... suitably assembled...for such challenges. 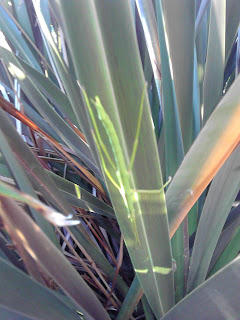 Anyhoo, we humans spend a lot of time complaining about the weather, but I think bugs have it worse, which has prompted me to start a short video series; Bug vs Wind, to highlight their daily struggles in this wild wind tunnel we live in.

Our first film star is a sticky! Wahoo! Isn't she amazing. She's clearly got a system--go with the flow, but never let go... as you swing high and low... I like her MO... Inspirational stuff, if you ask me. Why pay a life coach/therapist when one can glean free pearls of wisdom for surviving in this adapt-or-die world, just by spying on bugs?

The video is too large to upload here so you'll have to wander over to youtube to admire this stick insect with stickability.

This last photo is of our film star taking a well earned breather. Such composure. Hard not to be impressed, really. 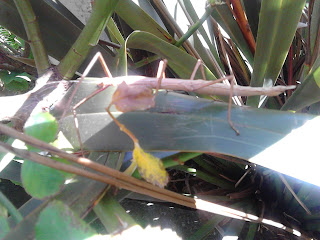