Rules to live by.

Identify what you're eating. That's the golden rule isn't it. When you're foraging for wild mushrooms, herbs and berries, don't stick anything in your mouth, no matter how appetising it looks, until you are sure it isn't poisonous. Good advice that. Note to self--remember it.

I ate some soap on Christmas day. Not on purpose, just in case you were wondering. If an image just flashed into your head (as it did into mine) of me skipping through a sun-baked meadow, basket in hand, stopping every now and then to pick blackberries, crab apples, and soap sprigs passing themselves off as edible fungi, well, it wasn't quite like that. Sadly. I didn't have to travel very far to find the soap. It was on my thumb. I thought it was yogurt, so I licked it up. 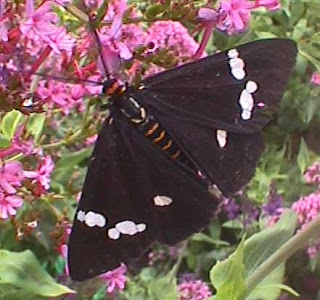 In my own defence, I was dispersing yogurt through my muesli at the time, so it was an easy mistake to make. And my judgement was impaired by my pre-caffeination status, so everything was a bit blurry. Could've happened to anybody, right? At least, that's what I will continue to tell myself.

Yogurt and soap actually look quite similar. From a distance. Don't taste the same though. Obviously, the distance decreased somewhat as I moved my thumb towards my face to ingest, but I still didn't pause to make a positive ID. Hmmmm.

At least when people ask me what I got for Christmas, I can say, "my mouth washed out with soap."  That oughta catch them off guard. I can picture the raised eyebrows already.

Technically, one could argue that I got my mouth washed out with water to try and remove the soap that I stoopidly put into it, but I doubt the conversation will continue that far. If it does, I will report back.

The delightful creature in the above photograph is, I believe, a magpie moth, a grown up version of the shopping mall wriggler I mentioned in an earlier post. He/she was very camera shy, so tis lucky I managed to get any shots. Check out those cool belly stripes; 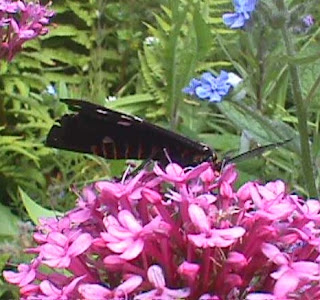 Assuming I have made a positive ID in this instance (please feel free to correct me if I'm wrong), the stripes of this NZ native are horizontal in the moth and vertical in the caterpillar. How neat is that.

Here are some more pictures of a magpie moth caterpillar that I took ages ago. Yet another bug that knows how to colour coordinate. I spotted this fellow about two weeks after I bought the stranded caterpillar home, so I did wonder if it was the same one, just chubbier, as would be expected, but he was quite a distance from where I put him; 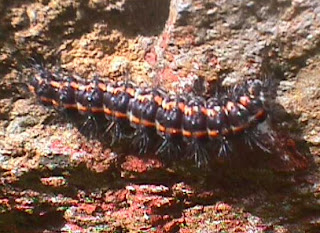 He was motoring along though, so you never know... He did, after all, somehow hitch a ride into the middle of a shopping mall; 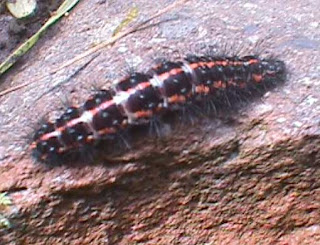 I thought he may have been frantically looking for food, so I offered him a smorgasbord of tasty morsels from the garden, but all of my suggestions were rejected. I now know they have a very selective diet. They clearly follow that "identify what you're eating" rule. Sensible fellows; 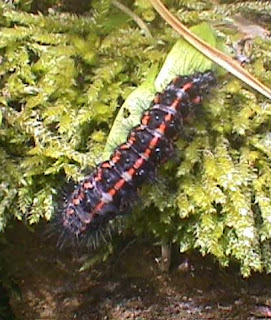 They don't seem to be quite so fond of the "look before you leap" rule though. But then, I'm not very good at applying that one either. Maybe they have velcro feet too, like the stickys. (You were waiting for me to mention them, weren't you.). Or poor eyesight, so they can't see that it's a looong way down. That ignorance is bliss thing; 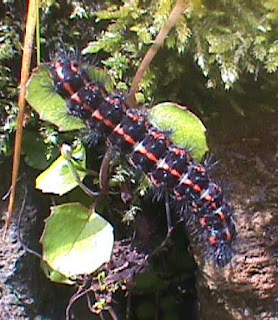 He didn't fall though. Just in case you were wondering. Phew. Maybe he found a lucky clover; 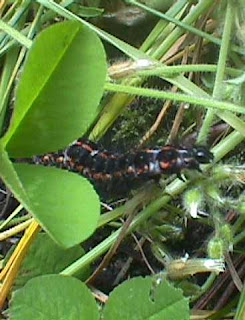 It doesn't work, btw. That washing ones mouth out with soap thing. But I'm running Windows 2000 on my computer. I reckon that's enough to make anyone cuss...

Gymnasts in my garden.

Based on my own obsessive observations, I must conclude that the private lives of stick insects are far more energetic than we are led to believe. So far on this blog I have provided photographic evidence that they spend rather  a lot of time canoodling, that they are happy to strut their stuff for photo shoots, and they even dance with their own shadows. I strongly suspect that they are also in touch with their inner gymnasts. This sticky is clearly practising her ribbon routine; 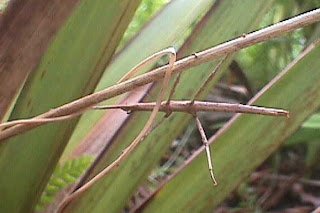 And this lass looks like she's about to spiral down the flax pole, gracefully twirling her convolvulus ribbon, maybe finishing her performance with a double flip, or perhaps the splits;

As soon as my back was turned, I reckon this sticky resumed his trapeze act--swinging round and round the flax leaf. I hope he didn't make himself dizzy; 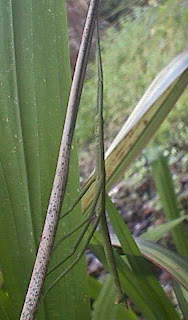 And here we have another sticky doing star jumps. Or trying to; 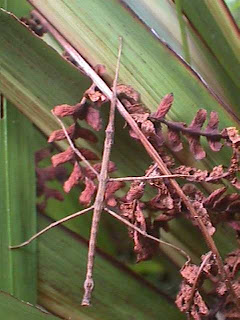 Check out his back right foot. Looks like a bit of an awkward pose, doesn't it. His bottom resembles a musical instrument, imo. An in-built flute. Not sure what kind of tune it would play though...

This sticky is shedding its skin. And doing it in style--performing a balancing act in mid air. Don't know about you, but I'm impressed; 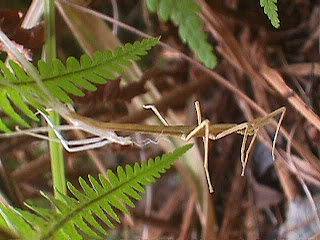 Can only speculate about the gymnastic content of this liaison. Look at all those legs; 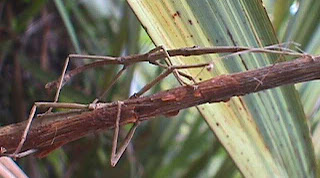 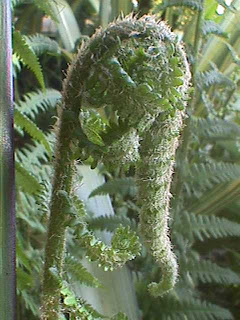