I think I may have an obsessive compulsive spying on stick insects disorder. OCSOSID, for short. I don't believe any intervention by professionals will be required, it's a relatively harmless addiction, imo. The only danger is that other people will think I'm bonkers...but...well...might be a bit late to pretend otherwise...

Anyhow, the reason I suspect I am stuck on stickys is because I was sitting in a hospital waiting room the other day and I found myself scanning the limbs of the nearby pot plants for them. Not that likely that I would spot any in such a sterile environment. Especially since the plants were plastic. Oh dear.

It wouldn't be such a concern if I had stopped searching for them once I realised the greenery was man made, but I confess I took a second look. Possibly a third. Maybe even more than that. Eek.

I was waiting quite a while though, so it's hardly surprising my imaginative mind would search for something more stimulating than the women's gossip magazines on offer. At least, that's what I will continue to tell myself.

Also, a lot of the pretend leaves on the pretend plants had fallen off, which is just plain weird. It confused me a bit. Maybe that was all part of the attempt at authenticity. Make them look half dead like they would be if they were real, cos what plants could survive in a hospital waiting room? It's just a given that no one would remember to water them. Not with water, anyway.

Man, I hate waiting...how much longer is this gonna take...why isn't there a clock in here...probably cos they don't want us to know how long they are making us wait...this decor doesn't really do it for me...why are there red stickers on all of the paintings...kinda makes ya look at the sticker, not the picture...how dumb is that...

Perhaps they're identification numbers...so they can keep an inventory of all the paintings that get pinched....do people steal art from hospitals...if you can call it art...surely the stickers aren't price tags...maybe one of the doctors is painting portraits as a sideline...maybe he's painting one now...that would explain the loooong delay...

Is that or is that not a dollar sign then...can't quite see from here...shall I get up to look...nah...oops, I just stared at that woman again...she's gonna notice I keep looking at her soon...then we will have to exchange awkward smiles... quick, look away, look away...I wonder if there are any stickys on the pot plants...

STOP! STOOPID WOMAN! WE HAVE ALREADY ESTABLISHED THAT THE PLANTS ARE NOT REAL! STICK INSECTS DO NOT LIVE IN HOSPITALS ON PLASTIC SHRUBBERY! HOW MANY TIMES MUST WE GO OVER THIS! Man...I am such a doofus...

Only trouble was, I couldn't stop smirking, thinking about what a dork I am. Predictably, a giggle escaped. They have a habit of doing that. Little stirrers. Always trying to get me into trouble.

Another woman a few seats away glanced in my direction. Not an overly friendly glance, I have to say. More of a scornful, "You can find something to laugh about in a hospital waiting room?," kind of look.

I contemplated explaining the reason behind my random outburst, but got the impression it was probably wiser not to. Attempting to alert others to the humorous nature of my internal musings usually just results in a prolonged gigglefest (where I am the only one laughing) littered with poorly structured, often monosyllabic sentences, ie, incoherent babble. It gets messy. The look of social discomfort on other people's faces just makes me laugh harder.

Most bystanders assume--incorrectly--that I must be on drugs. Or completely mad. Given my location, I decided it would be sensible not to encourage such speculation. I don't know where the psych ward is, and I would prefer to keep it that way. The safest option was to loiter in the plastic-plant-free corridor instead.

But of course, a post about stickys with no pickys of the little darlings would not be a very nourishing post at all, now would it;

Not sure why the top one has its foot on the bottom ones head...doesn't look like a malevolent gesture to me though, but I could be a smidgin biased...

The stickys seem to be rather obsessed themselves...with canoodling...I have seen a lot of stickys stuck on other stickys of late...good grief...I had no idea they were so amorous...the frisky fellows...

I know I said in an earlier post that bugs have a right to privacy too...this next photo is, I hope, a reasonable compromise; 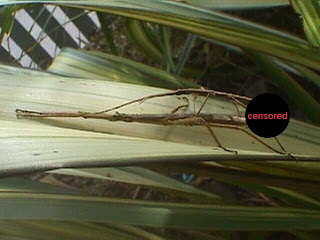 Just in case you doubt my obsession status, I actually had a dream the other night too...one with a giant stick insect in it. Way cool. He/she is welcome to frequent my nocturnal escapades anytime. Hopefully I will have a flying dream soon...one where I am soaring through the air in formation with winged stick insects...how marvellous would that be...can hardly wait...

Of course, google is helping fuel my obsession. I'm curious to see what stick insects in other countries look like. In case you haven't yet indulged, here are a couple of good starting points--gardenguests (You soooo should check out the frog photos on that site too, there's one of a jilted frog scowling at his rival who got the girl. It's a classic.)

Stickys are canoodling across the tasman too--peonyden

PS: Yup. It's official. I'm obsessed. OCSOSID it is. I know how much doctors hate it when patients self-diagnose, but the clinical evidence is overwhelming. I was awoken from my slumber early the other morning by strong winds and rain. Naturally my first thought was,"OMG! I hope the stickys haven't come unstuck!"

Hopefully they have velcro feet so they can cling to the branches when the weather is grim...That might be my next task for google....investigating what the soles of stick insect's tootsies look like. If you find a link before I do, feel free to draw my attention to it.

These two are still in the "let's get to know each other a bit better" phase, so no censorship is required. But ain't they cute...They actually fell off the flax leaf just after I took this snap, which casts doubt on my velcro theory, but they landed on their feet, so to speak, and have picked up where they left off; 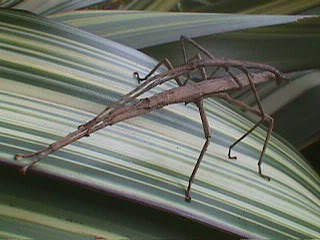 And I can't resist posting another photo of the same pair, cos that's what obsessed people do; 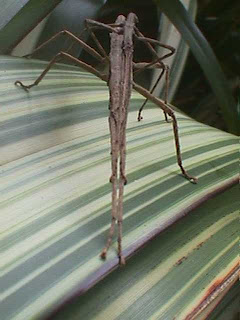 And don't they just have the coolest legs?

(Oops, this post seems to have grown legs of its own...it wasn't meant to be this long...honest...reckon I better edit my "about me" to include "seasoned waffler.")
Posted by Holly at 4:34 AM

Cheers for the mention too - appreciated.

Take care and keep up the fantastic work.

Hi Holly
Jokes about non-existent Stick Insects on plastic pot plants are best not shared in a Hospital waiting room.
They might suggest you are in the wrong ward.
Thanks for the mention, too.
Cheers
Denis

Ta very muchly, Paul. I'm sure I could develop a fixation for those cute little metallic flea beetles you have over there too. Shame they left. Maybe they got invited to a party. They look like they're in a party mood...

Agreed, Denis. Misdiagnosis is always a worry. Luckily my self-edit button wasn't obscured from view--like it usually is. Phew.