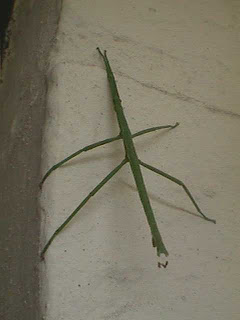 I'm used to seeing bugs in strange places. All the same, I would've liked to have perused a copy of this sticky's itinerary. Where was he heading? Other than up the wall... Was he planning to go around the bend too? He's right beside my front door, so maybe he just stopped by to say hello...

His side profile is also quite fetching; 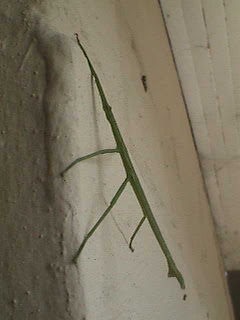 That little dark spot on the wall to his right is a moth. Maybe they made the trip together, an insect bonding thing. Or a competition...

Just to give you an idea of how far up the wall Mr Sticky and his winged companion were; 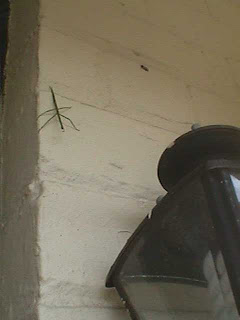 The light is just above my head, so it's quite an epic journey for a bug.

Later on that day, the sun offered another photo opportunity--a bug and his shadow! Yay!

Btw, that's a bit of garden debris attached to his bottom, just in case you were wondering. It could, of course, also be the insect equivalent of a fashion accessory; 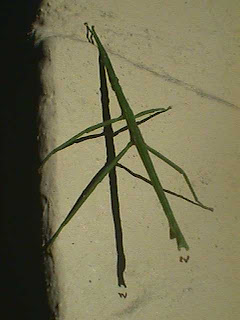 Once again, my subject showed how versatile a bug can be when a photo opportunity presents itself; 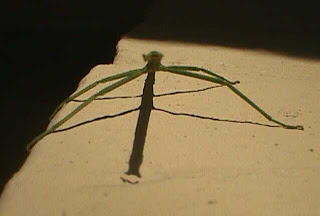 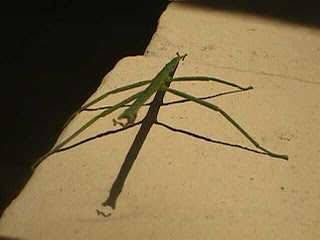 I was faced with the familiar dilemma I experience whenever I see a bug far from their natural habitat...do I intervene? Provide some assistance?

I've seen praying mantises climb the walls, presumably to lay eggs, but I do believe this sticky is a boy...and I was concerned about where he might end up, like underfoot. (Don't worry, I wrote myself a note--on a sticky of the other kind, actually--to remind myself to check for wayward stickys before setting foot outside...)

He stayed in this spot for two days, and then, sure enough, my safety concerns were realised when I opened the door the next morning and found him sitting on the actual doorstep. As much as I like to be greeted first thing by an adorable bug, nevertheless, intervention was most definitely required.

I hope sticky approved of the flax bush I put him on...