Things that go beep in the night...

My new flat has lovely high ceilings. Like the ones you find in old houses. Probably because it is an old house. Trouble is, some doofus has put the smoke alarms up there, on the faraway ceiling, where I can't reach them.

Yes, I realise that they are up there so the smoke can reach them, and then they can blurt out a warning message that the house is in danger of burning down. I get that. Smoke alarms are important. Go buy yourself one, if you find yourself alarmless. But...they are beeping at me. Constantly. They have been beeping, in fact, since before Christmas. By my calculations, Christmas was a while ago now. I think they want someone to change their battery. I get that too. Battery changes are important. Otherwise they won't work. Go buy yourself one, if you find yourself batteryless.

But...I can't reach them, to change theirs. I have no furniture to stand on. At least, I have no furniture that it would be wise to stand on. Even if I did, a chair would not be sufficient. A desk to put the chair on, would also be required, along with a reasonable sense of balance. And probably longer legs. None of which I have. The job requires a ladder. Typically, the flat didn't come with one.

I have been unwisely standing on one of those flimsy fold up garden chairs so that I can poke the alarms. (Please don't try this at home.) My poking device consists of an old badminton racket with a long thin piece of metal that broke off of my clothes airer, taped to it. I have to stab the reset button thingy with this implement, while trying not to wobble over. It's a delicate procedure. Especially when wobbling over is something that I am very good at...hmmmm... And if I do this last thing at night, this action only has a limited effect. Invariably the beeping resumes in the wee small hours.

Yes, I have tried burning things. Beneath them. To exhaust the battery. But to no avail. Maybe they don't have enough battery left to read my smoke signals, only enough to complain that they can't. Sometimes they go quiet. Just for a short while. Until I get my hopes up...

They have some sort of banter thing going on too. One beeps, and the other answers. Kinda like birds, chirping to each other, but kinda not like that at all. For some reason, the one in the kitchen chirps louder. Guess it must be the mummy bird... It's quite draining, listening to that constant beeping. Not draining on the batteries though, it seems. How much longer can they last? What if I run out of juice before they do? What if I go completely mad? Maybe they aren't actually beeping at me, but laughing at me...yeah...I thought I detected a slight mocking undercurrent in that last shrill exchange...

I can see the headlines for this predicament too. "Woman's brain fried by fire safety device." Spontaneous combustion is a real phenomenon, isn't it? Surely that would set them off...

If they weren't radioactive, I think I would've smashed them into tiny pieces by now. Except of course that I can't reach them to do that...

There is actually a bird nest in the roof. They make a lot of noise too. Breakfast is early in this house. But they are birds...and I like birds...so that's a racket I can live with. If my assumptions re the avian growth cycle are correct, they will leave the nest soon enough anyway. If only they would take the smoke alarms with...I reckon they would be able to reach them...

Oh well. Let's cheer ourselves up with another RBP (or Random Bug Photo, in case you missed the introduction in my last post). This is the gentle art of wooing, stick insect style; 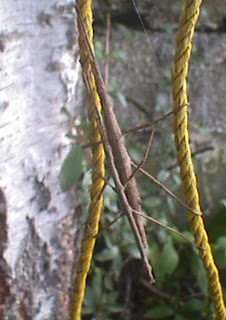 I yelped with delight when I saw these two acrobats yesterday. I yelped in fright first though cos I nearly squished them. I went to grab the rope they are dangling from as its function is to hold the gate open so I can wheel my bike through it. Obviously they found another purpose for the rope. Ain't they sweet. And they're still there. They have now progressed beyond the hand holding stage, but I won't be posting a picture of that. Bugs have a right to privacy too. Even though they have chosen quite a public place to be private...
Posted by Holly at 2:48 AM No comments:

I went for a walk in my new neighbourhood the other day and met a rooster. I'm not used to seeing random roosters, out and about, all on their own, so naturally I felt the need to inquire into his well being. Our conversation went a little like this;

Me: Are you lost, Mr Rooster?

Mr Rooster: Gazed nonchalantly at me which I interpreted as,"Hey lady, do I look like I need a chaperone?"

Me: You are a terribly handsome fellow.

Mr Rooster a.k.a. Little Red: Gazed nonchalantly at me which I interpreted as, "Always have been a bit of a chick-magnet. The main rooster in the hen house. Ruffled more than a few feathers in my time, let me tell you." Gaze followed by an almost, sort of, possible wink.

Me: Do you have enough to eat out here?

Little Red: Gazed nonchalantly at me which I interpreted as, "I am a chicken of means, but I have been known to accept bribes. Whatcha got?"

Me: Oh. Um...sorry...I don't actually have any food on me. If I'd known our paths were going to cross, I would've packed some rooster friendly delicacies.

Little Red: The laid back expression persisted, conveying something along the lines of, "Hey, no harm done, just make sure you bring something tasty with, next time you're in the neighbourhood. I'll keep a look out for ya."

Apparently, Little Red is just one of many. Apparently, there is a free range colony living further up the hill. I can't wait to meet them. I am soooo intrigued by the idea of a gang of bachelor roosters. My speculations about their community dynamics have lead me to affectionately give them the title of The Rooster Mafia. I figure that a group of testosterone fueled man birds will have a well established pecking order. A mob leader, whose commands must be obeyed, at all costs. Or else. I bet he gets to crow first. Naturally, those on the bottom rung will have devious plans afoot to over throw the dictator and rule the roost. I imagine it will be kinda like Lord of the Flies, poultry style.

I bought these no doubt fabulous fellows a bag of wheat. Slightly nervous about the idea of feeding them though, truth be told. But perhaps they are used to tasty treats from random humans. They might form a polite orderly line. Or even turn up their noses, so to speak, if they're used to more upmarket offerings. Or...I might get mobbed. Trampled in the stampede. Crushed under chicken foot. Smothered. Suffocated beneath a feather blanket. Not that far fetched, given my spindly disposition, my unco tendencies, and my feather allergy.

Would be kinda funny, I think. I can see the newspaper headlines already... "Woman escapes the perils of an earthquake ravaged city, only to be pecked to death by a mob of unruly roosters." Although that's probably a little wordy for a headline...let's see if I can truncate it a bit... "Quake survivor target of Rooster Mafia hit." The idea amuses me. There are worst ways to go, I'm sure. And far more mundane ways, too.  I'd like to qualify for the Darwin Awards, when the time comes...(Did I just say that out loud...?)

I actually did take a photo of Little Red, but it didn't come out very well, so you will have to imagine how handsome he is. Don't hold back. Instead, I will introduce a new feature of this blog, from now on to be known as an RBP, or Random Bug Photo.

Check out the cuddling cicadas; 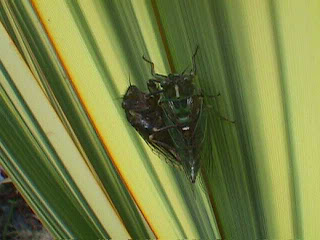