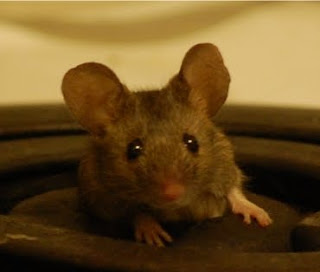 He's alive! But it was touch and go for a while there, folks. We had a massive earthquake recently and Mr Maus disappeared--for 26 days... When we had an as-it-turns-out-not-so-big-after-all-big earthquake last year, he was only gone for five days.

This time, I gave up hope. Finally accepted that he must have run off and got lost, or had a heart attack, or something. He is getting on a bit for a mouse. And the house shook soooooo much more violently than it did in the first quake... (Sheesh. How many times can you shake a house like a rag doll before it falls down? Okay, so I'm not really sure I want to know the answer to that question.)

Imagine my surprise, and delight, when I got up one morning and saw that Mr Maus's plate had been relieved of its peanuts! Its somewhat stale peanuts... Woohoo! The little ratbag had me so worried...or perhaps that should be mousebag...no...that just sounds weird...let's go with rascal...

Anyway,  in case you're about to ask, yes, I'm sure twas not another mouse, or two, that stumbled across his smorgasbord. It's my Mr Maus. He's back to his porthole antics.

And I'd recognise those adorable little ears anywhere. (Scroll back up, or head over to the photo essay in my first post, if you need to.) I watched him cart off ten sunflower seeds in a row the other night, taking one at a time back down the porthole. Very methodical. Very nimble.

I don't think he hangs out under the element all the time though. I have reason to believe that he has an office/den inside the toilet/kitchen wall. But how does he get his stash from one room to another, I hear you ask? Good question. I've wondered that myself. We've already established that he doesn't have any pockets...

Maybe he has some sort of "mouse-bag." (Sorry, might've neglected to warn you about the potentially prolific puns that may randomly appear in this blog. Oh, and there may be some appalling attempts at alliteration also. Can't promise not to resort to the insertion of a run of the mill cliche or two, every now and then, either. Better the devil you know, I say. Consider yourself warned. I'm working on an official disclaimer.)

But, back to more important considerations. What kind of mouse-bag? Does Mr Maus place the nuts and seeds in a handkerchief? The sort you then fold up and tie to the end of a stick? No, I don't actually like that image, cute though it is, it makes me think of him leaving again...Sauntering off into the sunset...

Maybe he just has a backpack. Or a satchel...yeah, that would work...or maybe he needs a satchel...I wonder if I could assist... Did Barbie ever go through a satchel phase? Would be about the right size. The color range, or rather, the lack of color range could be an issue though... How does he feel about pink? Hmmmm....might spoil his image...

Reckon he'd look supremely cute with a briefcase. Executive mouse. Dark sunglasses to match. Kinda fits with him running his own black market business. But then, he seems more the bohemian type to me...waistcoat...frayed jeans...perhaps a goatee...

Let me just take a moment to reassure you that dressing animals up to look like miniature humans is soooooo not my idea of fun. From the photos I have been unfortunate enough to see, it doesn't look like any of the decorated animals are having fun either. I never, ever, made my cat wear a tiara.

Admittedly, I did make him wear an Elizabethan collar once, but it was plastic, and it had a purpose--to stop him ripping out his stitches. [Why do cats do that?] I did make him wear a sock once too, but that was so he wouldn't rip off his bandage. It was also a homemade polar fleece ensemble. Very unfashionable, and completely useless.

Okay, so I just googled "barbie satchel" and they do exist, they're just not barbie-sized. Doh. Time to rethink that idea.

The big question, of course, is not what kind of nut transportation receptacle Mr Maus employs, or needs, but where was he for those 26 very long days? Perhaps I'll never find out--unless he opens up in a tell-all interview. At least I know he can survive without my packed lunches. If the house falls down in the next even-bigger-than-big quake, hopefully he will once again be resilient. A friend did comment recently, "mice live a life of high adventure, don't they..."

Having said that, I do have some concerns about his survival skills. They may need some fine tuning. My cat was born without a sense of self-preservation. As was I. Perhaps I will elaborate on that another time. Perhaps not.

Right now, I'm wondering if this condition is contagious, because the other night I watched Mr Maus run over not one, but two cacti plants. The kind that have lots and lots of prickles. Ouch. I've had a few run-ins with them myself. Not so much fun. He didn't yelp in pain though. Or even slow down. Admittedly, they are peanut cacti, but really...why would he do something so stoopid?

Oh wait...I'm forgetting his activities on the night we first met...I see a pattern forming here... Unless of course, there is a basic physiological explanation. His eyesight might be a little compromised. Would explain his lengthy absence--maybe he couldn't see his way home.

But then, you never know...his cacti dance could've been intentional. The mouse equivalent of walking over hot coals. I have noticed that he seems less jittery and more confident since his return. Is approaching the world with reckless abandon his new post-quake motto? I hope not. I may have to worry--more than usual. Tis a perilous existence for a mouse.

But perhaps I'm forgetting my place. He is his own mouse. And I am just a mere mausmaid... If he wants to spend his evening plucking prickles out of his appendages, who am I to judge. (Um....yeah...I did move the cacti though. How could I not. His feet are insanely cute...well matched to his ears...the photos don't do them justice...)

You know...don't want to go all philosophical on you...but I'm thinking that Mr Maus could be onto something. Re his post-quake motto. I may have to steal it...

We like to think we have some control over our lives, but none of us really know what is looming around the next corner. Or even if there's another corner for something to loom around. The earth beneath the city I live in has swallowed a fair number of corners lately... Reckon there's a good chance it will try to ingest some more. Reckless abandon could be the best way to--try and--survive it all.

Don't worry. Not about to scatter cactus plant prickles over my keyboard anytime soon. I may, however, embark on a quest, bravely wading through the treacherous sea of clutter in my quake-rearranged living room in search of a dust-infused, cobweb-covered parchment, a.k.a. my bucket list...
Posted by Holly at 4:53 AM 2 comments: