I frequently entertain dark thoughts of bashing my faulty modem to a pulp with my hammer. It is not uncommon for me to see, "Error 692: hardware failure in modem", five times in a row. Reinstalling it hurts my fingers. Ouch. Just in case you are wondering, secondhand dial up modems compatible with my fossilised laptop, are hard to come by.

When I mentioned my malevolent urges to a friend, he replied that he had a spare. Naturally, my first thought was, spare modem, or spare hammer? I confess I quite like the idea of pulverising the modem with two hammers. It would be hard to injure my thumbs, like I usually do, if they were both preoccupied with hammer holding.

But then, I am more than a little unco. The hammers might fly out of hands. Other objects do. For no apparent reason.The modem might not be the only one in danger. I think I would need to wear safety glasses. Maybe protective clothing as well... And a helmet... My legs seem to be particularly susceptible to injury, so maybe some shin pads would be called for. In case hammers have any boomerang-like tendencies. And I should probably administer the punishment away from the windows. And do it at a time of the day when mothers aren't walking their children to school, or home again. Wouldn't want the neighbourhood to get the wrong impression of me...

The idea seemed so simple at its inception. Kill the modem. But the plot keeps getting thicker. I have detected another problem with the twin hammer idea. My thumbs would be busy. I would therefore need someone to hold the modem still. I don't expect that it would try to run away, but my rudimentary knowledge of physics leads me to speculate that it might move when I thump it. I don't think any of my friends, being familiar as they are with my unco status, would volunteer to hold the modem... And the vices I possess--or perhaps, the ones that possess me-- would not be helpful in this situation...hmmm...

In summary, I must conclude that acts of grievous bodily harm against inanimate objects require careful planning. Guess that's where that premeditated clause comes in. I'm certain my insomniac brain will be discussing the finer details of modem murder in the wee small hours... yippee... (I blame the friend who put the idea of a two hammered approach in my head. Grr.)

It's RBP time again. Let us put our hammers down and mellow out with this tranquil image. What could be more calming than the sight of a spider hugging a flower. Everybody say, ahhhhhhh; 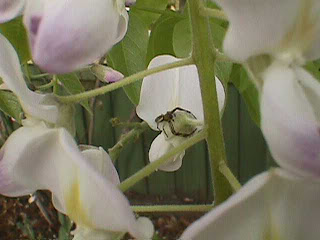 Things that go beep in the night update: A friend from out of town turned up on my doorstep the other day. With her very tall husband. And a substantial stool. Yay! I am no longer being driven insane by my smoke alarms constantly beeping. (There were 18 to 22 seconds between the beeps the other night, around 1am. I know this because, yep, I counted them.) Oh the delights of a beepless existence. Someone oughta do more research into the health effects of noise pollution.
Posted by Holly at 1:38 AM No comments: