The delights of misinterpretation.

A friend mentioned that her son was going out to her parent's farm to pick up cones. A source of revenue for his piggy bank. He's saving for a scooter. Nice.

Naturally, I assumed she meant road cones. I wondered why they would have road cones on a farm. Did the sheep need to be reminded to keep left? Or perhaps they used the cones to practice their defensive grazing. Despite being perplexed, my rather visual mind imagined her son stacking bright orange road cones into tidy piles. In the hay barn. He stacked the first bunch too high, though. They wobbled over. Bound to happen.

Then I wondered if my friend meant ice cream cones. Not that likely, I agree, but doesn't it sound fun? Like something Willy Wonkerish? I pictured a field filled with all flavours of ice cream, waffle encased ensembles standing upright like sunflowers, some drenched in hundreds and thousands, others laced with chocolate sprinkles...a few chopped nuts for good measure...what kid wouldn't want to collect those... My sugarcoated fantasy was briefly interrupted when I stood in a cow pat, but then I realised it was just a chocolate puddle, so the uncomfortable oozing sensation quickly became a pleasant one. As for the aroma...mmmmmm...

Then I realised that my friend probably meant pine cones. Doh. Although in my own defence, I was, up until recently, living in post/mid apocalyptic earthquake ravaged Christchurch, where there is a proliferation of road cones, alerting motorists, cyclists and pedestrians to the proliferation of potholes. They are imprinted on my brain. So there.

I have no issues with pine cones. I like them. A lot. They are one of nature's many exquisite designs. But they are nowhere near as exciting as my interpretation. Reality never is. Was an interesting visual journey before I arrived at the pine cone conclusion though.

This is, of course, a reminder that we all see the world differently. And that I am probably more than just a bit odd.

(Disclaimer: My odd thoughts are not prompted by another type of cone. Just in case you are wondering.)

I wonder if bugs notice my oddness. I would like to know what this fellow is thinking. (Yeah, I know, probably something like, "get out of my face, you freak."); 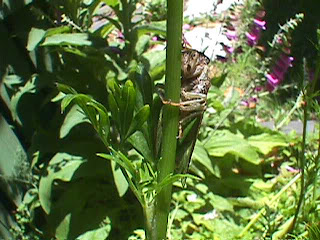 The Rooster Mafia Part Two (Part One is here)

Well I went looking for the mob the other day. Little Red was nowhere to be seen. There was another red rooster though, whom I shall call Big Red. Haven't thought of a name for the grey one yet. They were somewhat more docile than I had envisaged. And they weren't all bachelors.... Big Red has his own harem. A few feathers went flying when I scattered the wheat, but apart from that, things were quite subdued. A black rooster and a white rooster couldn't even be bothered joining in the seed scramble/photo shoot. I didn't take it personally.

Someone is looking after them. Yay. Someone who must have a car, I reckon, judging by the monster sized pile of freshly dug potatoes, well positioned in a shady spot. They even have their own water bowl, with rocks in it. And water too, of course.

This is part of the gang: 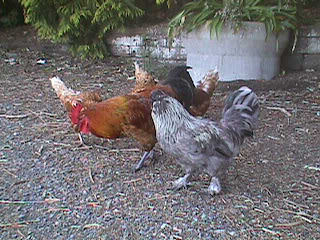