Turns out I wasn't exaggerating after all. My garden is brimming with stick insects. Tis a bug fancier's dream come true. All colours and sizes. I've seen way more than twenty in the last few days. And yes, I have more photos. And yes, I'm going to make you look at them.

They're not quite as animated as the extrovert I met the other day, but some of them clearly have more important things on their minds than entertaining the resident human. Like this happy couple, for instance; 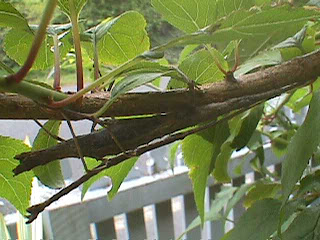 Interesting size difference, I have to say...

I confess I'm a little concerned though that some of them may not be using their natural camouflage skills to their best advantage. If I can spot them from my verandah, three metres away, I reckon so can the birds. And most of them are at hedgehog height. Eek. I know hedgys are visually impaired, but they might be able to sniff them out. Best not to think about that, really; 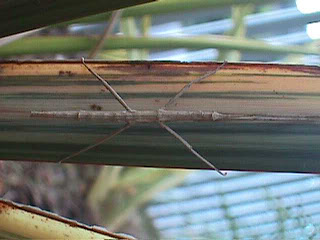 This one is a little more discreet; 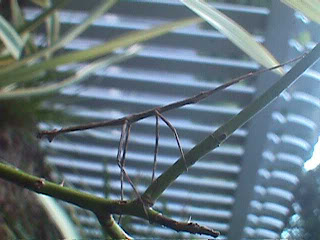 This one, not so much; 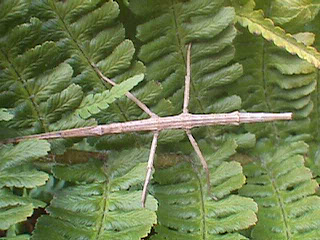 And this guy just looks hungover; You'll be pleased to know he has perked up somewhat. Guess he just had a rough night. I assumed at first that he hadn't moved for days, as that appears to be his spot, but then I realised how presumptuous it was of me to think such things. Who knows what kind of wild adventures stick insects have when darkness falls and there are no humans lurking about spying on them. I feel a little guilty, actually. A bit voyeuristic, even...but, having said that, if I had a night vision camera...

Of course, sticky may not have been off colour at all. He could've just been practicing for when the surf's up...

But anyway, a spider declared he wanted in on the photo shoot, so who am I to deny him his five minutes of fame. He was playing footsie with the hungover sticky. Don't know what that was all about, but rest assured, it was amusing, from my perspective, at least; 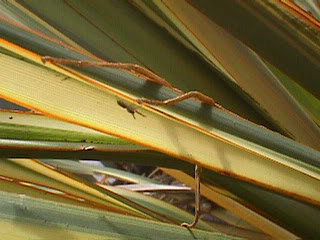 And a front on view of another sticky (note the second one just below); 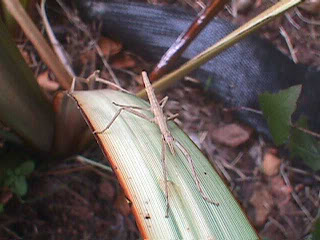 As you can see, their friendship is progressing; 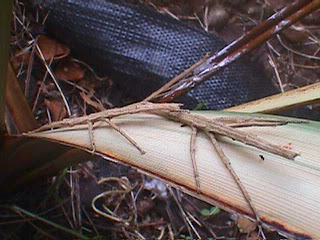 Hopefully this young lass will find a companion soon. The odds are in her favour, I reckon; 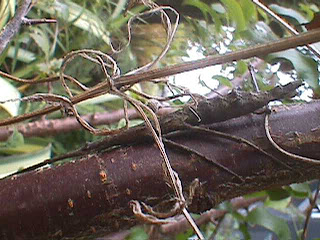 Is it just me, or do they look a bit like alligators? With longer legs?  And minus the teeth and personality issues? Not that I've met any alligators in the flesh. I'm sure they probably have a gentle side...one they show to those individuals who don't make them salivate.

Finally--for today, at least--just in case you have always wondered what a stick insect's belly button looks like;

It's stick insect central at my place. Woohoo! Actually, that might be a slight exaggeration...I have only seen two in the last couple of days, but rest assured they were both noteworthy. And I have the photos to prove it.

I thought the green sticky had expired, but it was only pretending to be dead. Phew. I picked it up with the intention of finding it a more fitting final resting place than the verandah, when it suddenly stuck out its leg. Impressive. I relocated it to a colour coordinated environment, a.k.a. a tree. Without further ado; 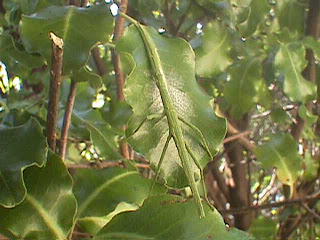 The one today really knew how to work the camera. Talk about personality plus. A model model. My kind of sticky. But of course, I like the shy ones too. Here's the extrovert in action... 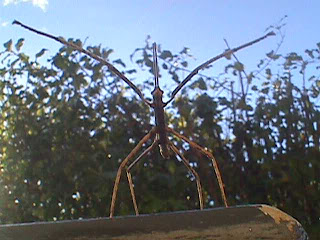 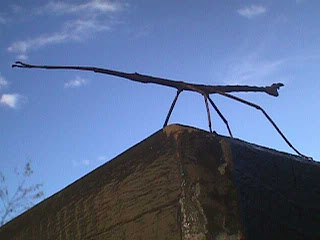 Another striking silhouette (and I thought my knees were knobbly); 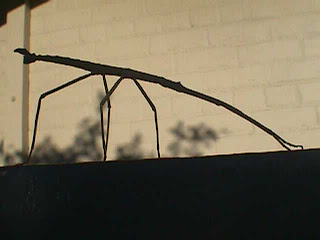 Looks like I'm not the only one prone to exaggeration..."It was this big!"; 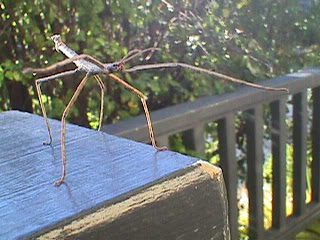 The daydreamy head in the clouds look; 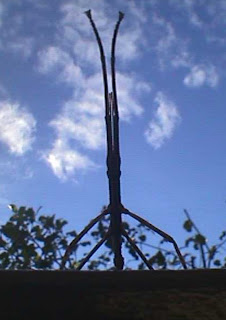 (PS...if you have nothing better to do, try saying, "stick insect central" ten times in a row. Really fast. Guaranteed to make your brain hurt. Make your friends say it too. Go on. Just for a laugh.)
Posted by Holly at 4:56 AM 3 comments: