My camera isn't posh enough to get a good close up of anything teeny weeny, but I still think these stickys are post worthy; 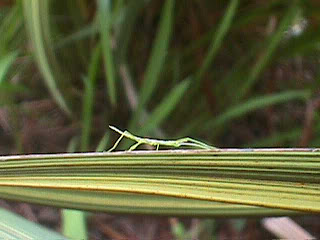 Easy does it, sticky. It's a long way down; 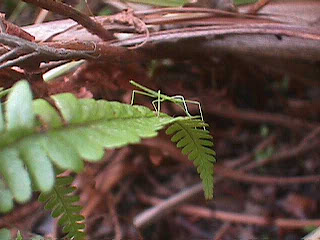 Just to prove that my obsession with stick insects has not dampened my adoration of other bugs, let's pause to  admire a newborn spider montage created in the corner of my lounge window; 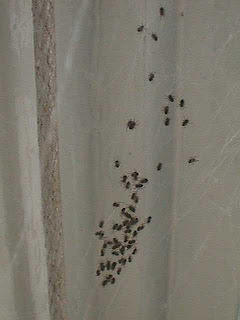 But we can still go back to adoring stickys, whenever we feel the urge. There's no need to deprive ourselves; 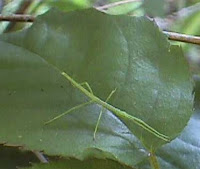 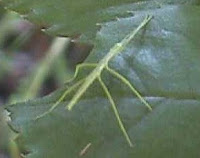 Tiny, delicate, and perfectly formed, just like the leaves they are showcasing themselves on; 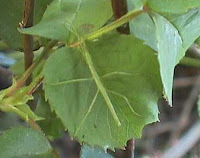 And unbelievably photogenic, too. (As if I needed to say that out loud);

Perfection poised amongst the petioles;

They definitely deserve their place in the spotlight;

But back to other bugs...

I almost missed my photo opportunity here because this little fellow was a total speed freak. Caterpillars can really hoof it when they want to. Who would've thought;

Which reminds me...I was wandering through a shopping mall about a year ago when I just happened to look down, and what did I spy on the floor...in the middle of the walkway...but a caterpillar. True story. It looked just like this one. It's a miracle I spotted him as he was the same colour as the floor. I guess his enthusiastic wriggling caught my eye.

At the risk of sounding anthropomorphic, I'd have to say Mr Caterpillar looked a little troubled by his alien surroundings. I, for one, would really like to know his back story. How on earth did he get there? I didn't have time to ask though. With a herd of school children stampeding towards him, I had to take drastic action. I dropped to all fours and formed a protective cocoon around the first time shopper. (It was my first time in the mall too, coincidentally.)

It's quite possible that the people who stared at the strange woman who was kneeling down in the middle of a thoroughfare, had no idea my hands were cupped around a caterpillar. It's also quite possible they may have thought I was more of a freak if they had known what I was doing. I've learned to accept these things. I expect the mall security peeps watching me on camera may have also been perplexed--concerned even--by my activities.

Anyway, trying to--safely--pick up a squirming caterpillar from the floor of a teeming shopping mall is not for the faint hearted. He resisted my rescue attempts. Eventually I managed to persuade him that my plan made more sense than his did.

When we finally made it back out into the sunshine, a new problem revealed itself. My efforts to find him suitable accommodation nearby, failed. I had no choice but to bring him home with me.

A nice woman in a shop found me a plastic cup to put him in for the bus ride, which was a relief. It's not easy extracting ones bus fare--or doing anything else, for that matter--when you're nursing a feisty caterpillar in the palm of your hand. I put a piece of paper over the cup, and secured it with a rubber band.

Whenever I leave the house now I take a BRR--a Bug Relocation Receptacle--with me. (One of those cylindrical cotton bud containers, minus the cotton buds, in case you were wondering. Works a treat. As long as you don't forget to take it with you.)

I wonder if the fellow in this photo is one of Mr Caterpillar's descendants...

And just to show how unpredictable I can be, let's finish today's little nature excursion with something other than a sticky picky...introducing a shiny new feature of this blog, the RFP, or Random Flower Photo.

A pansy in the process of unwrapping its gift to the world; 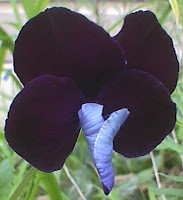 The Thing in my Basement

I don't have any dodgy connections. Other than my faulty dial-up modem, of course.

Perhaps you could argue that some of the synapses in my brain don't fire in a satisfactory way. And the follow on effect of synaptic sluggishness is that the brain--mouth connection sometimes goes pear-shaped.

But I'm derailing myself again, aren't I.

Before we get back on track, let's have an RBP, because every blog post should have one, and because this sticky is just soooo adorable, I cannot withhold its picture any longer; 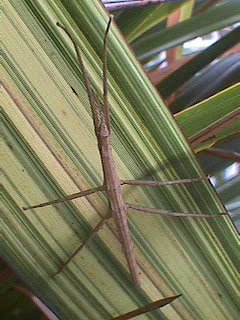 Now, what I was trying to say is that my only connection to the criminal underworld is that I keep moving into flats thugs have previously resided in. Not on purpose, just in case you were wondering. I just seem to have a talent for it.

Not the best skill to possess, admittedly. And while I'm happy to be a bug-magnet, unfortunately my spindly weakling/runt of the litter status has always made me a thug-magnet as well. Oh yay. Bullies are just drawn to me. I'm like some sort of homing beacon. They have a habit of moving in next door to me too. What fun.

And part of the problem is that because I got the shit kicked out of me while in the protective womb of the state school system (shin pads should be standard issue for all the short geeky kids on their first day, I reckon), I'm now soooo over bullies. I don't scare easily. I've noticed that bullies don't like it when they snarl at me like a rabid dog, and I respond with one of my deadpan, Is that all ya got? expressions. It makes them look a bit silly.

Probably a bit silly of me not to be afraid of them though, all things considered... I wonder if there's a name for that disorder... oh wait, I think I may have mentioned that I was born without a sense of self-preservation... 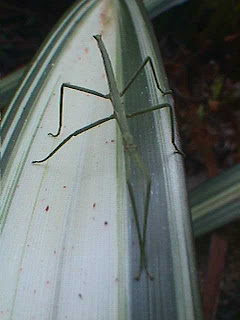 Speaking of consequences, as a writer I know I'm always supposed to be on the lookout for morsels of information that can spawn my next story. I get that. I admit to it. I'm nosy. And imaginative.

But "inquisitive" and "creative" tis a dangerous combination. And when it comes to personal experiences with Thugs Incorporated, I've already got plenty of material to work with, thanks. I really, really don't need any more.

By now, you're probably thinking--if you haven't hit the back button yet--what on earth is this mad woman waffling on about? Where is all this leading?

Down into my basement, of course.

When I moved in I sort of poked my nose under there, but didn't look properly, because I can't see in the dark. I'm not sure eating more carrots would help. It's pitch black under there, folks. My groovy solar powered torch, bless it, just doesn't illuminate the landscape anymore. You could say it has synaptic issues of its own.

So what did I do then? Absolutely nothing. Even when the nice peeps at the power company sent me a free torch a few months later, I still didn't launch a basement expedition.

Not scared of the bogeyman or anything, or worried that the hawks might get me on route (haven't seen them for a while, actually), I just didn't need to go down there. Having dumped most of my possessions to get out of the swamp--formally known as Christchurch--it's not as if I'm desperate for storage space.

I did ask my landlord if there was anything interesting under there and she said no, and like the gullible fool that I am, I believed her. Every now and then the thought crossed my mind that I probably should take a peek, since it's my basement and all, but...well...I didn't. 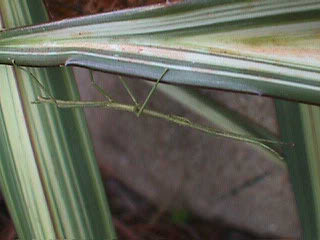 In my own defence, the door to the basement sticks, and the bolt is rusty, and the only time I did prise it open I injured my thumb on it. Ouch. Not much of an incentive to repeat the performance.

And I know the neighbour's cat would follow me down there cos he's nosy too. It would be a mission to coax him out again. Cats are like that.

But curiosity got the better of me. Man, I hate it when that happens. It never ends well.

I finally ventured down into the basement the other day. Brave little me. I wore gardening gloves, a simple, and I'm pleased to report, effective way to protect my accident prone appendages. (The neighbour's cat was inside, just in case you were wondering.)

My new torch revealed an assortment of boxes and building maintenance paraphernalia...and something else. Something untoward. Something you would prefer not to see. Trust me. I saw the outline and thought, "Ooooh, if it's pretty, I might be able to use it upstairs." Then I shone my torch on it.

OMFG. Pretty, it is not.

I can't tell you what it is. Sorry about that. I'd like to. Honest. Hell, I'd love to show ya all a picture. I'd love to tell ya what I'd really like to do with it, but it would be very, very unwise for me to elaborate. Google is just way too clever. If I told you, then google might tell someone else.

I feel mean withholding such vital details, but I guess I must have a smidgin of self-preservation, after all. 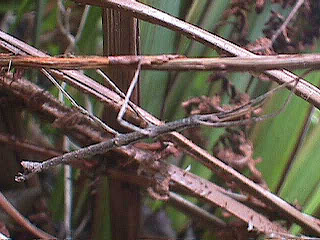 Anyway, now that I know The Thing is in my basement, I can't unknow it. Damn it. I can see it there. In my mind's eye. Directly below where I am currently sitting. It makes me think of Mr Poe's The Tell-Tale Heart. Not exactly an identical scenario, but my mind has made the association, and that's all there is to it. Who am I to argue.

Just get rid of it then, I hear you say. Ah, if only it were that easy. It's a tricky thing to dispose of. Very tricky indeed. Too heavy for my spindly little arms. And that's all I will say on the matter.

Curiously enough, I got some very odd looks from the proliferation of workmen who ventured down into the basement--with their heavy duty torches--recently. I reckon I know why now. They didn't look at me funny beforehand. OMFG, they probably thought "The Thing" belongs to me. I am, after all, the tenant who rents the flat that is attached to the basement.

The Thing isn't actually illegal, or dangerous, not directly, anyway, and I have mentioned it to the police (and no, I didn't have a laughing fit on the phone, just in case you were wondering), but it does indicate that someone who is dangerous, and who does illegal things, used to live here. Yippee.

The inevitable question is--does the thug brigade still have a key to this flat?

Given that my homing beacon appears to be in perfect working order--no synaptic sluggishness there--then the answer to that question is most likely affirmative.

After discovering that the previous--dodgy--tenants at my last abode took off, leaving the door wide open and the key in the lock, I decided not to bother changing the locks, which turned out to be a mistake. Hmmmm.

The moral of this story, a.k.a. Holly's Helpful Hint for the Week is; when you move into a new (but technically, secondhand) house, don't fart about, go and look in the basement, if it has one, straight away. Or better still, inspect the basement, before you sign a lease.

Either that, or make a conscious decision never to look. That works too. Ignorance is bliss as they say. I wish I had never gone down there.

And on that note, I think it's time for a morale booster...in the form of, you guessed it, another sticky picky!

Three cheers for my fantastic photogenic Phasmid family! They really know how to colour coordinate themselves, don't they; 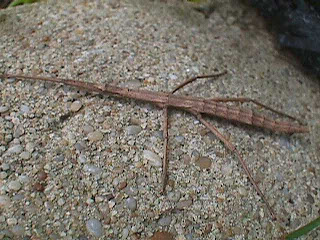